In response to The Daily Post’s writing prompt: “Ghostwriter.”

It’s been a while since I’ve written anything in response to one of WordPress’ daily prompts, largely because many of them would have made me feel very self-centred in doing so. That sounds silly in my head, and looks even more stupid on screen, as that was the whole point of starting this blog: writing about my experiences. But I’d like to think I’ve broadened my scope since then. Today’s prompt can be found by clicking the link above, but to save you the trouble it reads:

“If you could have any author – living or dead – write your biography, who would you choose?”

This prompted two thoughts. Firstly, what an interesting idea, and secondly that it sounded familiar. Having looked back through my previous posts I realised why: I’ve already written ‘Saturday Night Clive’ about this in response to a prompt in July 2013. I re-read that post and decided that I’d make the same choice again. So, in the interests of being a good citizen and doing my bit for recycling, I’m reblogging it. I know it’s lazy but hey, they’re my words so I can choose to reuse them! I hope you like my choice of Ghostwriter:

Daily Prompt: Your Life, the Book

Today’s prompt reads: ‘From a famous writer or celebrity, to a WordPress.com blogger or someone close to you — who would you like to be your biographer?’

Having thought about this for a nanosecond or two I realised that it wasn’t going to be easy to select my biographer. There is just so much choice. I don’t think it would be fair to impose that task on any fellow bloggers, although many of you write beautifully. I’m open to offers though!

So I turned my thoughts to the literary world and, as befits a graduate of English Literature – albeit one or two years ago now – I started by considering the greats: Homer, Chaucer, Shakespeare, Dickens, Archer and a few others, but there was a major problem with this. They don’t have biographies on their CVs. Oh, and they are all dead. Well, except Jeffrey Archer, but as far as great literature is concerned he may as well be. So I thought about writers who were still breathing, but none of them took my fancy. There are many whose writing I enjoy, but they are mostly novelists and I’m not sure they’d want to write a biography. Still, it’s worth a thought as at least they might create something worth reading about my life! Just imagine what Carl Hiaasen could do with it, or maybe Harlan Coben. But if I asked Jeffery Deaver he’d probably want me to be murdered before he’d take it on. The same goes for Patricia Cornwell. On second thoughts, I’m not that keen to be the subject of a book!

So how about current biographers? Lady Antonia Fraser is still alive, I think, but her biographies are about the long-since deceased, so maybe that’s not such a good idea. The same goes for many others who seem to prefer historical subjects, rather than current ones: writers such as David Starkey or Simon Sebag Montefiore, for example. Thinking about it, there are quite a few celebrities ‘writing’ books at the moment. Maybe John Sessions or Rob Brydon would do it? If nothing else, it would at least get them thinking about someone else and away from their usual state of self-satisfied smug gittery. Maybe I could find out who the ghost writers are for all of the ‘celebrity’ autobiographies? Do you seriously believe they all write every word themselves? Oh please! Or perhaps one of the unauthorised biography writers? The guy who wrote the one about Justin Bieber, perhaps. After all, he’s only three and they made a whole book about him!

But then a flash of inspiration hit me! I’d found my biographer! Someone whose writing I’ve long enjoyed and admired, whose broadcasting has entertained me for more years than either of us would probably care to remember – one of his programmes is the title for this piece. And we share the same name. It’s as if we were made for this! Ladies and gentlemen, I give you….Clive James (fanfares, trumpets etc).

You may never have read any of his work. Long renowned as a TV critic, as his most recent piece in the Daily Telegraph shows, he is a master of the English language and how to use it. And no, I won’t be making any jokes about the fact that this is remarkable, considering that he’s Australian. Amongst other things he has written several volumes of autobiography, starting with ‘Unreliable Memoirs,’  which I’ve always thought a great title. If you have a Kindle, Amazon UK are currently offering a combined set of his first three volumes for less than a fiver – bargain! I bumped into the great man once. Literally. We were approaching the corner by Covent Garden tube station from opposite directions and….wham! I’m not sure which of us was more pissed – I think it might have been him, by a milligram or two. A slurred, mumbled apology was all we managed. Still, it’s good to have a claim to fame, isn’t it! 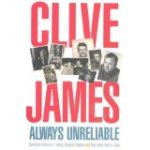 Your mission, Clive, should you choose to accept it, is….

I wonder if he’d be prepared to do it? It would be a challenge for him, no doubt about it. If only there was something interesting I could give him to work with…..