I’m famous! Well, I’ve been featured in public, which must count for something, I think. Andy Warhol once said that ‘in the future everyone will be famous for 15 minutes.’ I wouldn’t dignify my time in the spotlight as being that long but hey, we can all dream, right?

Some background is needed, to help fill in the gaps. A couple of years ago, a guy named Rhodri Marsden asked on Twitter for people to give him stories of family Christmases. Rhodri is an author, journalist and musician – a member of Scritti Politti, no less – and was compiling a book about what made for a traditional British Christmas. My elder daughter, Katy, shared a couple of stories with him and, following his acknowledgement, we heard no more. Until last May, that was, when Katy WhatsApped me to say that Rhodri had been in touch and wanted to chat about using one of her stories in his book, as it was a perfect fit. Fame at last!

I thought no more about it until Christmas, when the girls gave me a copy of Rhodri’s book (other gifts were available!). Here it is, in all its glory: 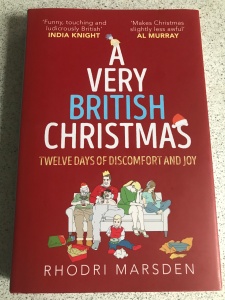 The book is a lovely mixture of funny and sad stories from contributors such as Katy, bound together by Rhodri’s witty writing. As you can probably guess from his subtitle, he based his themes loosely around the 12 Days of Christmas song. Very loosely, actually, with chapters entitled Eleven Sherries Swigging, Ten Carols Screeching and Five Broken Limbs! which is where I come in.

Nothing broken, in my case, unlike some of the other sad cases in the chapter, but this is me:

I would like to point out that the excitement of winning a whole pound on a lottery scratchcard wasn’t entirely the cause of my sedentary gymnastics. I was ill at the time. It was Christmas, and I was always ill at Christmas, according to our family legend. But no one really wants to know that, do they? Apparently my roll from chair to floor in a semi-comatose state was quite spectacular to behold. And it is now recorded for posterity on the printed page. Am I a star, or what!

We talked about the book for a while, and it brought back many happy memories of Christmases when the girls were little, not all of which were due to my various seasonal illnesses. Katy expressed a little disappointment that Rhodri hadn’t used her other story, though to be fair, now that I’ve read the book, I can’t see where it would have fitted in. I somehow doubt that he will be stretching the material he collected to a second book, and it is a pretty good story, so I’m going to share it with you, dear reader.

This one probably dates to when Katy would have been around 10 and Ruth 5. My ex-wife always prepared the table well for Christmas lunch, and as far as we could tell it was childproof. Yeah, right! A plastic tablecloth was laid on the table, above which went the usual linen job, all topped off with a paper tablecloth with a Christmas theme. For the kids, naturally. Despite the fact that there were three adults present (my ex-wife, mother-in-law and me) we made the elementary error of leaving the two member junior destruction squad unattended for no more than a minute or two between courses, while we were getting various puddings ready in the kitchen. Suddenly, there was a huge commotion from the dining room, and a shout that none of us was expecting: ‘FIRE!!’

As part of the table display, my wife had set out a large display bowl, filled with water and adorned with a decorative display of tea lights. As far as we could tell from the subsequent discussion, Ruth had been attempting to move a paper napkin to her Nan’s place opposite her own, and had somehow contrived to catch it on one of the candles. Not content with her nascent attempt at pyromania, she then managed to drop the aforementioned napkin onto the table, but missed the bowl of water and tealights. I don’t know if you’ve ever seen flames leaping a foot or so above your dining room table, but it is at once both spectacular and terrifying.

What do you do to put out a fire? You use water, of course, don’t you? Being the nearest to a water source, I grabbed it and launched it at the fire, accompanied by four hysterical female voices screeching advice. The fire was successfully doused, but what I hadn’t heard in my leap into Fireman Sam mode was the warning from my wife that the saucepan of water I was about to use wasn’t exactly as I expected it to be. My brain went something along the lines of ‘fire-water-saucepan containing water- that’ll do.’ Unfortunately my eyes didn’t take in the full picture: the saucepan did indeed contain water but, also, quite a sizeable portion of leftover peas which had been intended for use in the Boxing Day bubble and squeak. Oops!

I’ll admit to feeling very self-satisfied at the effectiveness of my fireman act, followed a millisecond later by a realisation that the water I’d used seemed to be very green! The ensuing panic then widened itself to checking that the table hadn’t suffered any lasting damage – it hadn’t – and to using copious amounts of kitchen towel to mop up all the water that Dad had just flung with wild abandon at the dining room table. Having done all that, we then embarked upon the Great Christmas Pea Hunt. Have you ever thrown a saucepan of peas and water at a table? The little green buggers can travel some remarkable distances, I can assure you! It took quite a while, and there was a careful balance to be struck between locating and rescuing the errant veg and not treading them into the carpet. Eventually we decided that we had rounded them all up, and could now enjoy our pudding, though the occasional outrider was still being spotted several days later. For some reason, my suggestion that we rinse all the peas off so that they could be used in the bubble and squeak didn’t meet with universal approval – in fact, it was the classic equivalent of the Eurovision song contest’s ‘Norvège nul points.’ Well, I thought it was helpful, anyway.

Christmas wasn’t always that eventful in our house. But at least, for once, they all forgot that I was coughing and sneezing all over them. If I’m honest, though, there have been better Boxing Day bubble and squeak meals 😉