Last week I ‘celebrated’ my 300th post with a retrospective, in which I highlighted some of my older posts as examples of what I had previously offered you. It struck me, as I had managed to find some that I hadn’t previously recycled, that it might be worth sharing them again. 300 Not Out – A Retrospective was, after all, a long post during which the casual reader could easily get lost!

I’m starting with this one, from August 2013. As is often the case, a post can be prompted by something quite small and simple – here, it was the amazing amount of conditions which had been used to limit a marketing promotion. These seemed to me to be totally self-defeating, and it is no surprise that I didn’t find any use for the promotional voucher before it expired. I couldn’t even buy a Led Zeppelin CD with it but, as music fans may have noticed from the title of the piece, there was no need – I already had the full set 😊

This morning I went to our local town centre for a bit of shopping. While I was waiting for my drug dealer (Boots) to process my prescription for yet more medication I popped into WHSmith. One of the things I’ll be doing after I retire next month (have I mentioned that?) is to buy a new car, so I bought a magazine to help me choose. The assistant dropped a couple of pieces of promo stuff into the bag and when I got home I found this: 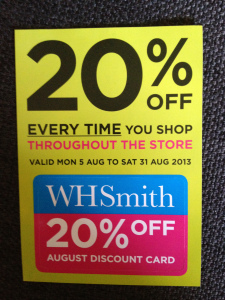 “What a good offer,” I thought, as I don’t often shop in WHS and with such a  large discount and four weeks to use it as often as I wanted, it was likely to make me spend money in there.  Then I turned it over and saw the small print. After locating my magnifying glass and wading through this I began to reconsider…

6 thoughts on “Dazed And Confused (Revisited)”