I know it’s probably a little greedy of me, but I support three football teams. The reasons for that are maybe the story for another time, but not today. One of those teams – Leyton Orient (the Os) – has a proud history which is relevant today. In its earliest incarnation the club was known as Clapton Orient, and players and officials from that club played a significant role in the history of recruitment for the First World War. I thought I would share their story as my mark of respect and remembrance today.

Two years ago, to mark the centenary of the Battle of the Somme, the British Legion published the story of those brave footballers who gave their lives. You can find the full story here but I thought I’d present it as a series of screenshots for you. (If they are too small to read on your screen, clicking on them makes them much larger, then you can press the ‘back’ arrow to return here): 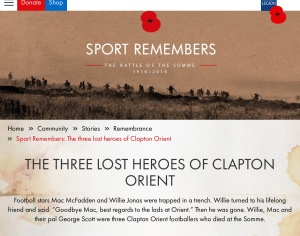 That story holds a very special place in the heart of every Os supporter, and has been the basis for some very moving ceremonies when the team has been playing at home on the Remembrance weekend. It is also at the heart of a play called The Greater Game, which is currently playing a limited run in London.

The words on this poppy are very familiar: they have featured in those ceremonies and reflect the losses suffered by so many at that time – like the Clapton Orient lads – and in subsequent conflicts:

They shall grow not old, as we that are left grow old:

Age shall not weary them, nor the years condemn.

At the going down of the sun and in the morning,

We will remember them.

(Taken from ‘For The Fallen’ by Laurence Binyon, September 1914)

On Remembrance Sunday, those words by Laurence Binyon never lose their meaning or their simple power to remind us of the sacrifice made by so many to protect the way of life we enjoy today – above all, our freedom.

I believe war to be abhorrent. However, that does not stop me from marking my respect for anyone who has ever taken part in a campaign to protect my freedom. I will observe the official silence in my own way, and will give them my silent thanks.

This year marks the Centenary of the end of the First World War, and there is much publicity for it. But I fear that with the passing of time, and without this major anniversary to remind us, the significance of this act of remembrance is decreasing, as this little poem illustrates:

Wherever you are, however you do it, I hope that you will be able to spare a moment today to give thanks for those who have died to protect your and my way of life. We should never forget. We owe them so much.