Time to open the number 2 window on my Advent Calendar. Still no chocolates, but the music makes up for that. Today’s song is a favourite of mine, though I haven’t featured it for a couple of years:

Nothing says ‘Christmas’ quite like cowboys and spacemen, does it! That one goes back to 2011, in the midst of a period when The Killers used to release a Christmas single each year, all the proceeds being donated to charity. They haven’t done it recently, as far as I can tell, but their collection is quite varied, and they always had fun making the videos, as you can see!

I’m giving you a second video today. For a difference, this one is a Christmas advert:

Hafod Hardware is a shop in Rhayader, a small town in mid-Wales. They first released a Christmas advert in 2017, and things really took off for them last year when they generated a huge amount of coverage in the national media here. This one was released early today, and I have to admit that I was waiting for it: as before, they have used a very limited budget – most of which is spent on acquiring the rights to use the music – and have, I think, succeeded again in getting right to the heart of what Christmas should be about. And they do it far better than the big retailers and their advertising agencies! The star of the video is little Arthur, who is, I think, now 3, though he has been in all four of their videos: a budding child star in the making, right from the time he crawled across the floor in the 2017 version! The music for all four of their Christmas ads has been provided by Andrea Von Kampen, and the beautiful simplicity of her songs is a perfect fit. This song is actually a real oldie, which has become a traditional folk song in the US. It was written by Stephen Foster (the ‘father of American music’) in 1854, and its message of asking the fortunate to consider those less lucky than themselves is just as true today as ever. I may well be sharing again their three previous ads during Advent: they are all as lovely as this one, so have the hankies ready.

Signing off with today’s picture, which was kindly provided by my friend Gill: 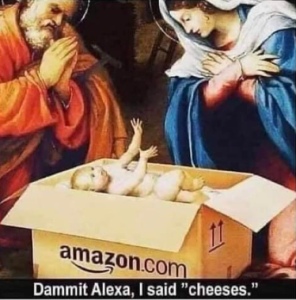