A couple of bloggy things have happened in the past week which have got me thinking about why I’m still doing this. The first was this:

Never in my wildest dreams did I envisage that as many as 70,000 page visits would be made to view my ramblings. Admittedly, in the peak years of 2013 and 2014 the success of BlogSurfer was significant in generating site views, and this has subsequently declined. But nowadays, I get more ‘likes’ and comments for my posts, and this more than compensates for not having the bigger numbers any longer. I’ve never considered myself to be a writer – just someone who dabbles and has taken advantage of the ease with which the interweb permits anyone to make their mark, albeit a very small one. And those interactions make it worthwhile: there is a sense of being part of a community, of belonging, and we all need that in our lives.

The second thing was the annual congratulatory message from WordPress on my ‘anniversary’ which, for some reason, they think falls in June. I know this to be impossible as the chronology just doesn’t work for me. But, as you do, I harboured a tiny doubt that they may be correct after all – I’m approaching 65, I have memory lapses more than I used to – so I thought it worth checking. I couldn’t find anything in my settings that would help, so I resorted to checking my previous posts. The first was made on 2 October 2012, and makes reference to my having set up the blog around six weeks earlier. Now this does indeed fit my memory, so maybe I’m not heading into my dotage just yet! Reading that post again was slightly surreal: I’ve never had an out of body experience but I imagine it may feel something like this. Was that really me? Did I really have the nerve to assume that anyone would want to read anything I wrote, that it would hold any interest for them?

I thought I’d share it again, as very few will ever have seen it. In its unedited glory, here it is:

I’ve had this blog set up for 6 weeks now and have somehow acquired 3 brave followers without having said anything, so I thought it was about time I introduced myself and told you what this is about (cue rapid exit of aforementioned followers!). So, I’m Clive (but you guessed that from the blog’s name, right?). I’m 59 (but only just!), divorced, living solo, and I have two beautiful grown up daughters who are the centre of my world. I work in the NHS, for a large Trust in London, and am planning to retire on my 60th birthday. I love books (on a Kindle), music (folk, rock, Americana, alt-country) both at home and live, I enjoy TV sports, especially football and cricket, and am a long-time supporter of Dover Athletic (home town team) and Spurs (someone has to!). All very ordinary then, so why am I telling you any of this?

Almost exactly a year ago, I was diagnosed with depression, along with a still unspecified sleep problem. This eventually kept me off work for nine months, and I went back in July, part-time working up to full-time after a month. As part of this process I was referred for counselling to help me adjust back into the real world, and I’m about two-thirds of the way through a course of Cognitive Behavioural Therapy (CBT). This has involved a lot of thinking and writing, in ways I’ve never really done before, about me, my feelings, hopes, self view and the whole experience of the past year. And this will continue into the future – I’m still on a high level of medication, barred from drinking and advised to be careful when driving, either separately or together, and still have big problems sleeping. But my counsellor has said that he finds my writing ‘inspirational’ and has encouraged me to start this blog, both because it will be good therapy for me to open myself up like this, but more importantly because others suffering from the same debilitating illness may see something they recognise in this and will hopefully draw some comfort and encouragement from it.

A subject like this could well be, erm, depressing really. But that’s not my way. I intend to write this from my perspective, of course, and I can’t do that for long before throwing in elements that could generously be considered to be ‘humour.’ In no way would I belittle the subject, I’ve experienced too much for that, but there’s no point doing this if people find it depressing or boring to read. And I’ll go off at tangents along the way too – things which strike me as interesting, usually but not necessarily related to my current experience of being ‘in recovery’ from the illness, which I hope you’ll find interesting too.

Enough for now, I’ll start the real posting soon. In the meantime, the three of you, I’m relying on you to help me spread the word and get me millions of followers. No pressure then! See you again soon.“

That post received a princely 3 ‘likes’ and 4 comments – and 2 of those comments were my own in response to others’ kind words of encouragement! Viewing figures were a little higher than either you or I might have imagined, though: 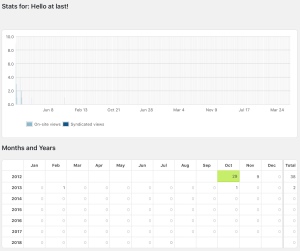 In those days I was much more active on Twitter than I am now, and had a number of people with whom I had regular twitchats. I imagine that they were prompted by Twitter to read the post though, as I say in it, it was only a brief introduction to what I really regarded as the starting point for this blog: when I posted the three parts of ‘The Story of My Illness’ over consecutive evenings in early November 2012. I know that many of them were ‘eagerly’ awaiting these – impatience was growing among some of them! Viewing stats at the time specifically for each of those posts were 52, 40 and 45 – although, as WordPress users will know, most of our page views become part of the large amorphous mass known rather unhelpfully as ‘Home Page/Archives,’ which doesn’t really permit a true view of the ‘popularity’ of a post, does it? If you haven’t seen those posts before, or want another look, they can be found under ‘My Story’ in the menu at the top of the site. They give you a good idea of where I’m coming from.

To those of you with large, popular blogs, with thousands of regular followers who ‘like’ everything you post, those stats will probably seem pathetically low. But that’s not why I do this. I’m content for this to be a hobby and if people are kind enough to read, like and comment then I’m very grateful for that. It’s not as though I make any money from this, nor would I want to: I’ve had many offers of hosting guest posts from commercial organisations, or of reviewing products in return for freebies, but they were all politely rejected. For me, although it is probably being po-faced to say it, it comes down to a question of integrity. I wouldn’t sell my body for money or trinkets (assuming I could find someone sufficiently desperate to take up the offer) so I don’t see why my words should be any different!

Reading that initial post again has given me several ideas for future posts: some things in my life have changed, some need updating, and as what I’m really doing here is sharing me with you I think you deserve to know. Of course, you’ll have had many clues about what is going on with me from my posts, so you will know that I did indeed retire on my 60th birthday – my thoughts on that are in the menu item ‘Retirement’ and I rather belatedly covered the celebrations in this post – and that I still enjoy my music, for example. But you won’t know that one of the lasting legacies of my long spell of depression is that, while I can cope perfectly well with newspapers and magazines, I have read very few books in my retirement: the powers of concentration just aren’t there any more! Life changes, and we adjust!

You may also have noticed the reference to the blog’s name including my own: when I first started out, with absolutely no experience of the blogworld, I just called this ‘Clive’s Blog.’ It was me, and it seemed to fit! I renamed this after I retired, both to reflect my new status as a gentleman of leisure and also my love of music. In case you don’t recognise the title (how could you not?!) I covered this in the first of my occasional series of #SaturdaySongs.

The main reason for starting this blog was to be supportive of those suffering from mental health issues. Whilst I may have digressed (a lot) from this, it is still a regular underlying theme, and you will see more on it from me in the future. Speaking of which, this is my 298th post and I’ve been thinking of a suitable way to mark the 300 milestone. Keep watching – I hope you like what I’ll be doing for it! And maybe I’ll mark my actual 6th anniversary in some way, too, though I haven’t given that much thought yet: it’s three months away, anything could happen before then!

The underlying message behind this post – yes, there is one, and thank you for getting this far! – is that those two little triggers have got me thinking about why I started blogging and why I still do it. I’m not unique or special, and I suspect you all have a variety of reasons for your blogs. But it is worthwhile taking a step back every once in a while, both to reaffirm our intentions and to confirm that we want still to be doing this. I know about me: how is it for you?