What happened in Pulse bar in Orlando on Saturday night was shocking, horrific, and utterly terrifying for anyone caught up in it. I can only write about it on the basis of the information I have been given by the British media, which may or may not be correct, but this information has got me thinking.

My heart goes out to the victims and their families. I cannot begin to comprehend the horror of being involved in such an atrocity. From a European perspective the obvious initial reaction was that as the murderer was called Omar Mateen this was likely to be another one-man terrorism act. Stereotypes, huh? We learned that shortly before he went out to kill people he had made some phone calls claiming allegiance to Islamic State. That just added to the image. But in the past few days it has emerged that he had also claimed to support a number of other terrorist organisations, some of whom hate each other, so that theory began to lose whatever credibility it might have had. It is further weakened by the fact that although his parents are from Afghanistan, Mateen was born and raised in the US and was a US citizen. So, not an imported terrorist, then.

Where to go next for an explanation? Pulse is a gay club, so this then became a crime committed by someone who hated gay people. Simple, huh? No, not simple: simplistic. Again, information started emerging that questioned the idea that this was ‘just’ a homophobic crime. A number of people have since come forward to say that they have seen and spoken to Mateen on several occasions at Pulse, going back over as much as three years. Why would he frequent a place filled with people he hated? Again, the simplistic answer would be that he was preparing for his crime, getting to know the club’s layout. But the evidence that he had been going there for three years would suggest otherwise. Today’s paper contains the theory that he was a latent gay, fighting against his inner feelings, and that killing gay people was his disturbed mind’s way of dealing with this. The suggestion by one of his ex-wives that he was bipolar adds to the picture of a troubled, complicated man, unhappy in his own skin and trying to find a way out. No doubt further information will become known in the days ahead, but it does appear that this may well be the explanation for what Mateen did.

The LGBT communities in the US and across the world fight an ongoing battle to be accepted and respected as people, in the hope that all civilised societies will reject homophobia as the crime that it is. Here in the UK I saw the Lord Mayor of Manchester on the BBC Breakfast programme, explaining why this was an issue affecting all LGBT communities, not just in Orlando. He spoke eloquently and movingly of how what had been expected to be a small memorial event in Manchester had become much bigger. And then there was this response, from the London Gay Men’s Chorus, at a very well-attended vigil in London to show support for Orlando’s victims. I think this is stunningly beautiful and moving:

Amidst all the coverage of why Mateen murdered 50 people, there is another question: how did he manage to do it? There is one very simple answer to that: because he could. Here in the UK we have homophobia, racism and all the other troubles that afflict the US. We have people who are troubled with their own sexuality, and we have people who suffer from bipolar disorder. But they do not have easy access to guns. In the recent past we had two major atrocities here: in Hungerford when 14 were killed in 1987, and at Dunblane School in 1996, when 16 children and a teacher were murdered. Our gun control laws have been substantially tightened since then. Of course, people can get around these, and always will if their intentions are strong enough. But they can’t just walk into a shop and buy a gun. The UK Government took on the pro-shooting lobbies and introduced the legislation anyway, arguing that the human right to life was greater than the human right to bear arms. I for one am pleased that they did. They did not have such an organised opposition to contend with as the NRA and commercial interests in the US, but they still acted to provide their citizens with as much protection as possible.

I read that this is the 15th time that Barack Obama has had to make a statement about a mass killing during his presidency. That is around two per year! Yet every time any politician raises the question of gun controls, they are howled down or, worse, declared to be unpatriotic, as the right to bear arms is enshrined in the Constitution. But that was written in 1775, and times have changed a little since then. It was no great surprise to me to see Donald Trump using events in Orlando to blame Muslims – all Muslims – for the crime and to reiterate his racist demand that all Muslims should be barred from entering the US. I doubt that he will be retracting these comments now that it is clear that this was not a crime of racial or religious hatred, or an act of terrorism. That would be too much to hope for. A cartoon in yesterday’s Times summed this up rather well: 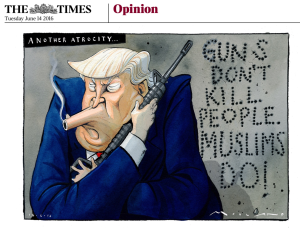 Sadly, it appears that many Americans agree with Trump on this issue and on everything else he stands for. The possibility of Trump becoming President is a scary prospect, not just for the US but for the whole world. It would be likely that, if anything, the pro-gun lobby would become even stronger. Even if they don’t, the ready access to guns will continue to mean that troubled people will still have few obstacles to shooting their way out of their problems. I accept that much is wrong with our UK society, but at least we don’t make it easy for people to become mass murderers.

America, when will you ever learn?

Footnote: This post had been mulling around in my head for a day or two, but has been written at the prompt of Bernadette, who blogs at Haddon Musings, as part of a theme week on her Senior Salon. This week’s posts can be found here.