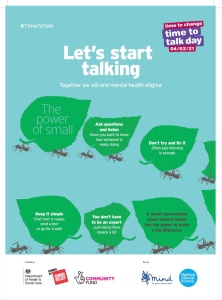 Today is #TimeToTalk Day here in the UK. The day is run by the Time To Change (TTC) organisation, and is all about opening a conversation: this may be with someone who might need support; it could be to help raise general awareness of mental health issues; or it may be to help people be more sensitive and caring towards each other. This year’s theme is ‘the power of small,’ which TTC explain as meaning:

“This year’s focus is on the power of small, because however you have a conversation about mental health – whether it’s a quick text to a friend, a virtual coffee morning with colleagues, or a socially distanced walk and talk with your family – it has the power to make a big difference.”

I hope you join in – no special skills or resources are required, just be yourself and talk to someone. You may be pleasantly surprised at what happens.

TTC is led by Mind and Rethink Mental Illness. If you’d like to find out more their website is here, and there are loads of resources available for you. I was particularly taken with these prompt cards:

There are many other resources there too, giving you plenty of suggestions as to how you might be able to help someone. I love this ‘bingo card’ as it packs so much into an easily digestible format: 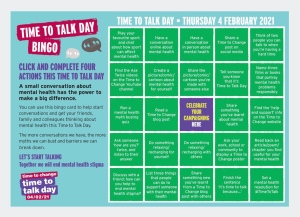 In current circumstances, lockdown isn’t making life any easier for those who might be struggling, so TTC are running a virtual festival today. You can find it via their website and this is the programme: 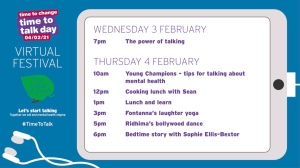 Another new addition this year is a book of poetry, written by a number of people who suffer from mental health issues. This is published today but as a Time To Change Champion I was given early access to it. I encourage you to find it on their website, and it is free to download. There are some very powerful poems in there – I rather like this one:

A couple of years ago I wrote a piece for TTC, but they didn’t use it – probably because I submitted it too late, and not in the way they prefer! But it gives a potted version of the story of my return to work, and why I believe this to be so important. I shared it again last year, but I’m guessing many of you won’t have seen it so I think it is worth another airing:

I was diagnosed with depression in late 2011. After months of treatment, both with medication and counselling, I finally returned to work more than nine months later. Perhaps ironically, I worked for a large NHS Trust which provided mental health services – though I didn’t live in the Trust’s catchment area – and whilst I had had a fair amount of involvement with service users in my twenty years there, most of the people I worked with hadn’t.

When I first returned, initial reactions were mostly of the ‘I haven’t seen you for a while’ variety. It was clear to me that only a few people knew why I had been off work, and I decided early on that the best way to tackle this was to be open and honest with anyone who asked about it. Not that I shouted it from the rooftops, but I wanted people to know and understand why I had been away, what it meant for me, and what it might mean for them. Some seemed apprehensive – I think they feared I might ‘have a turn’ or do something strange! The difficulty with any mental health problem is that other people can’t see it, in the same way they can see a broken leg, for example. This adds some kind of aura, a mystique, and can instil in some a fear of the unknown and unseen. I didn’t want to start some kind of crusade, but I believed it important to share my experience with anyone who asked. After all, to all intents I was the same person they had known for years, so why should they now treat me differently? Some might have had an expectation that I had changed in some way, and I wanted to reassure them that whilst the illness was a part of me I was still that same ‘me.’ People who have suffered a mental illness deserve to be respected as themselves: the illness isn’t a badge they must wear or, worse, a stigma to be borne as some sign of weakness.

I retired a little over a year later, and having already started my own blog I was aware how important it is for fellow sufferers to know that they are not alone, that others have shared something similar. But that isn’t the same for those who have been lucky enough not to suffer. I probably had around fifty conversations with co-workers in that last year at work, and made a point of telling them a few key things:

1. There is no shame in having been diagnosed with any kind of mental illness.
2. It can happen to anyone, at any time.
3. It is far more prevalent than people imagine, and it was quite likely that other people we worked with had similar problems.
4. Whilst some may not, many will welcome an initial approach of the ‘is everything ok?’ type. It does help to talk, and an informal chat can often be all that is needed to help someone.
5. Don’t be judgemental – people need to be heard, not given well-meaning ‘diagnoses’ by friends who aren’t qualified to judge.
6. Having been diagnosed doesn’t change who you are, and shouldn’t change how others see you.

I’d like to think that, in my own little way, I did something to help understanding and awareness. The important part of this was that it was on a one to one basis: I’m a great believer in the need for efforts to be made to widen the general population’s knowledge on mental health, and this low key approach is a good way to do that. Just imagine how many could be enlightened if we all had just one chat!

One in four of us will be affected by mental health issues at some point in our lives. That is a huge number and, as I said in that piece, there are often no visible signs that someone is suffering. Mental health problems can be all-encompassing, taking over your life, and it can be incredibly valuable to feel that there is support for you. So, do you know someone who might need help, but hasn’t asked for it? If so, those prompt cards I shared earlier would be a good place to begin. Try it – it will be easier than you think, even in these difficult times when face to face contact might not be possible. As I’m sure you know, there are plenty of other ways to communicate!