This is one of those posts that came up in my Timehop feed, and I’m rather glad that it did, as it gives me a second chance to remember the music and passing of Mike Taylor, of the band Walk Off The Earth (WOTE). I posted this two years ago today, and built it around my piece three years previously on the passing of David Bowie. Mike’s appearances in WOTE videos were always memorable and provided much of their humour, though they probably wouldn’t have given you much of an idea of how talented he was as a musician: his albums of piano music are lovely.

Any excuse for a reshowing of the video that started it all off for WOTE is worth taking, I think – combined views for this are now well past 200m. And there’s a little treat in there for anyone missing the tweets of the orange shitgibbon, going back to the days before he became a multiple time loser and had his main platform of abuse taken away.

But that aside, this is posted in memory of a man whose music and videos have given me a lot of enjoyment in the past eight years, and continue to do so. RIP Mike Taylor.

Three years ago, almost to the day, I published a post titled Starman on the death of one of my musical icons. As many of you have started following me since then you may not have seen this before, so I thought I’d share it again. At the time I had intended to write a piece honouring the memory of one of the true greats of rock music and in a way I did. But it developed into one of my occasional rants. Take a look to see why, and I’ll return after to explain why this has become relevant for me again:

“Over the past two days I’ve been doing what I expect many have been doing: I’ve been playing David Bowie songs and reminding myself just what made him such a special musician. I also spent a lot of Monday watching the TV news and the various tribute…

The day 16 window on my Advent Calendar creaks open. Having said that I wouldn’t be featuring many chart hits, I’m doing it again today. Just one, though, as I’m exercising a little restraint. Today’s other choice is from the first band to make their second appearance in my selections – because I think they’re worth it.

First up is a novelty hit from the days when just about everyone was releasing a Christmas record. It comes from one of the most talented musicians of the past fifty years, seen here putting his own unique stamp on a well-known Christmas carol tune:

The original tune is believed to have been written by a German mystic called Hans Seuse, sometime around 1328 – information from that time is a little hazy, as it was a year or two before Wikipedia began. It is the basis for the carol Good Christian Men Rejoice, and features in many collections of Christmas music. Notably, it is the theme for Bach’s chorale prelude (BWV 739). Mike Oldfield’s version was released as a single in November 1975, and reached #4 in the UK charts. It also made the top ten in Ireland, Belgium and The Netherlands. The other guy in the video, if you can spot him, is Les Penning, who played recorder and kortholt (a woodwind instrument) on the record.

(A PS: I’ve been advised that a reader in the US got the ‘not available in your country’ message on that video. But we tried this link instead – https://youtu.be/eIUlEUWKloM – which appears to work)

For my second song today, I’m giving you another from the excellent Walk Off The Earth (WOTE). By my reckoning they have made around ten videos of Christmas songs, each given a different treatment. I can safely say that this is the only song I’ll be including in my Advent Calendar which was recorded on a plane:

As with everything WOTE do, that video exudes their sense of fun, and I love the way they get others involved with it: that young lady is clearly enjoying herself. They make creative use of a small space, too, and there are some lovely reactions from their fellow passengers. That one just says ‘happiness’ to me.

Now, what could I choose as a picture to accompany these? How about this – a practice run for the flight path: 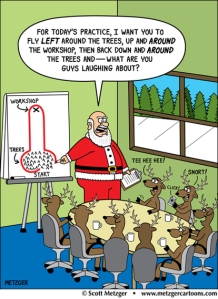