Those of you who have been following me since before last festive season may recall that I have posted a lot of Christmas songs during December. I’ve been doing that under the banner of #ChristmasSongADay on Twitter for six or seven years, and added the Facebook page for this blog into the mix for the past two years. I have also posted a kind of seasonal picture each day on Instagram: though these might not have been to everyone’s taste they made some people laugh. Previously I have shared selections from the Christmas songs here, to allow you to catch up, but I’ve decided to do it a little differently this year, so

“Welcome to my Advent Calendar!”

Sadly, I haven’t been able to work out a way of sending you virtual chocolates to open each day, so you’re going to have to make do with the songs and funnies. Sorry, but I’ll do my best to make it worth your while. What I’m going to be doing up to and including Christmas Day is to give you a Christmas song each day – or maybe two, as I can be more flexible with the format here – and share a Funny Of The Day with you too, all leading up to the big day and whatever might await us in a lockdown Christmas. So, without further ado (or waffle) here is the song that I have made it my tradition to begin with:

That was one of the big Christmas hits here in 1975, at a time when just about everyone was jumping on the bandwagon and releasing Christmas songs, though many of them were of dubious quality. You will, I hope, be relieved to know that very few of those will be featuring here: my preferred music for this season is rather better, I think, albeit a little obscure in some cases.

To get the month off with a swing, I thought I’d make today one of the ‘two song days’ by giving you this one too:

That song has become very much a Christmas standard since it was written in 1941, and there are known to be more than 220 versions in several languages. But I bet you’ve never seen it done like that before – I just love the bit when things go wild. That’s a far cry from Boney M or Crosby/Bowie, but I prefer it bigly. It dates back to 2013 when the band was a five piece, before the sad passing of Beard Guy (aka Mike Taylor). If you count the participants you can see all five of them so the ‘Feat. Doggies’ must be real, right? If Greg Lake can believe in Father Christmas…

That’s today’s songs, so its now time for the first Christmas Funny. I thought I’d break you in gently, as it wouldn’t be a good idea to lose you all on the first day: 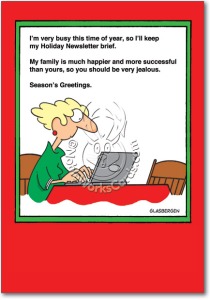 I wonder when the first of these will arrive?

A final note for today. If you’ve been paying attention you might have noticed a change in the blog’s appearance. I like to do this for December to go with the Christmas theme of the posts. Normal service will be resumed in the new year.