At the risk of repeating myself, I started this blog to share my experience of depression in the hope that it would help others. I worked for more than 20 years in the NHS for a large mental health Trust and although I haven’t blogged much about it recently mental health is still a subject about which I care deeply. Last week there was a story in The Times which alarmed me about the way mental health is supported, and which I felt I had to share. This post is about the situation in England but I suspect that the issues are common to many other countries around the world.

A little bit of background: when the Tory-led coalition government came to power in 2010 they embarked on a major restructuring of the NHS. There had been no mention of this in their manifesto, but that’s another story. One of the key changes was the creation of Clinical Commissioning Groups (CCGs) which were intended to put the power in commissioning health services into the hands of health practitioners (largely, General Practitioners, i.e. GPs) as this would, in theory, mean that those who knew best would be commissioning the services needed by their local population. There is an ongoing debate about how effective this has been and a range of other issues too, but I’m not going there. What interests me at present is this: 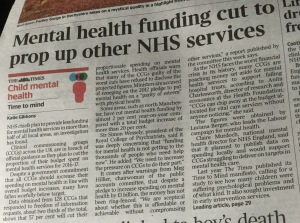 Apart from the fact that they are going against Government policy and misusing their funding, I am horrified that so many CCGs fail to see the importance of providing good mental health services. These are supposed to be the experts, those who know best. It beggars belief that they can be so ignorant. The Times commented further on this in their editorial section:

I’m with them 100%. The figures speak volumes, both in terms of the abuse of power these CCGs are engaged in, and of the pressing need for more investment to be made in mental health services. I started working in mental health in 1993 and even then it was recognised by many to be a Cinderella service, pushed into a corner and under-supported. And children’s mental health services were seen as the poor relations within that! Finally, it seemed, we had a government that was doing more than say nice words about this, but they are being let down by the very people who they thought would be best qualified to enact their wishes.

There have been many studies which have shown how good mental health can be of benefit to physical health, and vice versa. One of the problems in these days of evidence-based treatment is in measuring the effectiveness of mental health care. With a physical illness it is relatively easy to assess, likewise with injuries, such as broken limbs: there is clearly visible evidence available in such cases. But this is not always true of mental illness. To use my own case as an example, the diagnosis I was given nearly five years ago was treated, I returned to work until I retired, and since then I have not felt any recurrence of the original symptoms. So, does that mean I am a successfully treated case? Probably, as I’m no longer costing my local CCG anything for treatment, but who is to say that I am ‘cured’ or whether that is even possible? And does that mean that my local CCG shouldn’t spend the money it has been given to treat people like me on people like me, that it can choose to use it for other treatments? I think not!

People with mental illnesses have for far too long been discriminated against and stigmatised. Whilst this may be recognised by some, far too little can be done, both in terms of treatment and education, as the funding just isn’t available to do all that is needed. I know that the NHS in general is underfunded and that CCGs are under severe pressure to balance their books, as are provider services, but to take money away from the most needy part of the service is totally unacceptable, particularly when that money is supposed to have been ring-fenced for those services. Are the CCGs deciding on their service commissioning on the basis of discrimination and stigmatisation? Who can say, but it could be argued that they are showing signs of doing this. If the supposed experts don’t take mental health seriously, what hope is there that the general population can come to recognise the need to do so?

(Footnote: I am having a week of mental health awareness posts. This is my second, after yesterday’s reblogging of It Asda Be from three years ago. More is to come.)