My first attempt at a round up of the previous month was well-received, so I though I’d inflict another on you. For me, August was a strange month in blogging terms: a regular pattern followed by what counts for me as a deluge in the final week. I hope you kept up!

It has links to all of that month’s posts, in case you missed anything and are feeling distraught at having done so.

I then settled into my (now) regular routine of Tuesday Tunes posts, of which there were four – yes, August had four Tuesdays, if you hadn’t noticed. In chronological and numerical order, these were:

Snappy title, huh? I always knew that marketing degree would come in handy one day…

The rest of the month saw a return to more ‘normal’ titles, if anything I do can be classified that way. There were:

That last one had the strange result of attracting the fewest views and ‘likes’ of the August Tuesday Tunes posts, but also the most comments. Maybe I should have added some encouragement (sung, of course): ‘if you’re happy and you know it, like this post.’ Or maybe not – perhaps this series has run its course and it’s just the diehards left? I’ll see how it goes.

I then rounded off the month with two posts which showed – to me, at least – that I could occasionally write about something other than music. But music did feature in both: one day, I’ll write some words with no music! The first of these was an updated version of a post originally written four years ago, a reminiscence of my youth:

Born To Be Wild(ish) Revisited

As an additional bonus, that post included a link to a companion piece I wrote a few months earlier – they give each other some context:

I then rounded off my month with another reworking. This time, the original dated from 2013, and it seemed a reasonable bet that no one reading this drivel now would have been doing so back then – or would have forgotten, if they had:

You Go To School

That wasn’t one of my longer posts but it made some serious points, which are just as valid today as they were back then. And it contained a little music. Of course…

Do please tell me if this round up is useful, or if you’d rather not have been reminded of everything I’ve made you suffer in the previous month. Otherwise, there is always the danger that I’ll keep doing this.

This coming Sunday, 11th March, is celebrated here in the UK as Mother’s Day. This day has longstanding religious tradition and history behind it, although you’d be forgiven for not noticing that nowadays. These traditions vary, depending on the religion. Here the day is actually recognised in the church calendar as Mothering Sunday, and falls on the fourth Sunday in Lent. Because Easter is early this year, this means that for the UK, Channel Islands, Isle of Man, Irish Republic and Nigeria, who use this date, Mother’s Day is also earlier than in some years. There are in fact 32 different dates around the world on which Mother’s Day is celebrated, the most commonly used of which is the second Sunday in May, which is the day in North and South America, and across large parts of Europe, Africa and Asia. The modern version was first celebrated in the USA in 1908, after a campaign by a lady called Anna Jarvis to have a designated day for mothers. Commercialisation began in the 1920s, when Hallmark began selling cards, and Jarvis was arrested for a public protest against this. But the date and nature of the celebration have since been widely adopted.

The commercialisation of the date means that it is ubiquitous. Apart from all of the advertising which uses the day as the basis for promotion – often in incredibly dubious and convoluted ways – there are TV programmes, articles in papers and magazines etc, which are very difficult to avoid unless you become a hermit. And in this modern technological age, I’d also need to stop checking my emails too. Some of the bombardment is unbelievable: I even had an email the other day from a clothing company which only sells men’s clothing, inviting me to purchase one of a choice of outfits to wear when celebrating with my mother, from the formal suit to go to the posh lunch to smart casual if cooking her a meal at home, complete with an apron!

Mother’s Day is a hard one for me. My Mum died nearly ten years ago, on 15th May 2008 and, whilst the immediacy of the feelings of loss is somewhat diminished by the passage of time, those feelings are still there. Many millions have lost their mother, and could do without the commercial juggernaut reminding us of what we have lost and what we could have otherwise been doing. It’s a difficult time of year. I find myself wishing that all of the companies stuffing this down my throat would roll up their promotional material very tightly and insert it where the sun doesn’t shine. And I’d bet I’m not alone in that. I shall be spending this Sunday in quiet reflection, remembering the person who brought me into this world and all that she did for me. I don’t need any marketing to tell me how to do that. I find myself agreeing with Anna Jarvis: this should be a day to celebrate our mothers, not to spend loads of money. Whilst the cards, flowers, chocolates and wine – especially the wine! – may be very welcome, do mothers really need this to know that they are appreciated? Wouldn’t telling them, face to face, be much better? And doing things for them, to show them that you care? Not just on Mother’s Day either: our mothers are very special people and deserve to know that our love for them is always there, with or without the giving of physical gifts on a particular day to make the statement for us.

If you’re going to be spending Mother’s Day with your Mum, I hope you – and she – have a fantastic day, full of the joy that families give us. And long may you be doing that: the happiness of days like Sunday will build into cherished memories. To repeat myself: Mums are special people, they deserve our love. 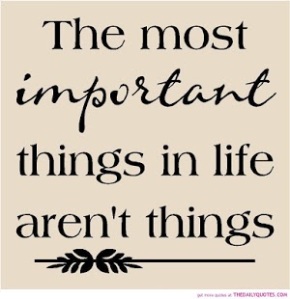