Today I awoke to the sad news of the passing of Professor Stephen Hawking. The word ‘genius’ is bandied around far too much – from pop singers who may have written one good song to the self-proclaimed ‘stable genius’ allegedly being Presidential in the USA. But Professor Hawking really deserved the attribution, if for no other reason than everything he did being so far above my level of comprehension that he must have been super-intelligent, right?

As coincidence would have it, the fates aligned for his passing to have occurred early on the day the Americans celebrate as Pi Day. For the uninitiated, this relates to the abbreviated version of Pi – 3.14 – matching the date for today in their calendar. Yes, I know they have it backwards, but that’s the way they do it, even if it is completely illogical. As this is as close as I’ve ever got to talking about anything scientific in this blog, it does seem an appropriate way to mark Professor Hawking’s passing and his genius to reissue this piece from last year, as my tribute.

And in case you haven’t noticed, Google have again marked Pi Day in their own inimitable style today. I mention in the piece that they have done this before, this is today’s offering: 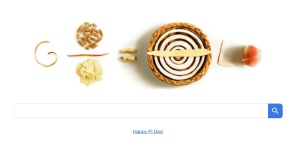 As every schoolkid should know, the fattest knight at King Arthur’s Round Table was Sir Cumference. He got that way from too much pi.

Readers of longer standing may recall that I used to post occasional Dates To Note and originally ran a version of this post in that series two years ago. I rather like this one, as it gives us Brits a chance to marvel at how weird the USA can be so, for newer readers, here’s a reworked version.

In the UK last week was British Pie Week, whilst in the USA 14 March is National Pi Day. Being a good British citizen of proportions that make me the answer to the football fans’ chanted question ‘Who ate all the pies?’ I was naturally drawn to this. However on further investigation I found that it was in fact a ‘celebration’ by Jus-Rol who make…yes…